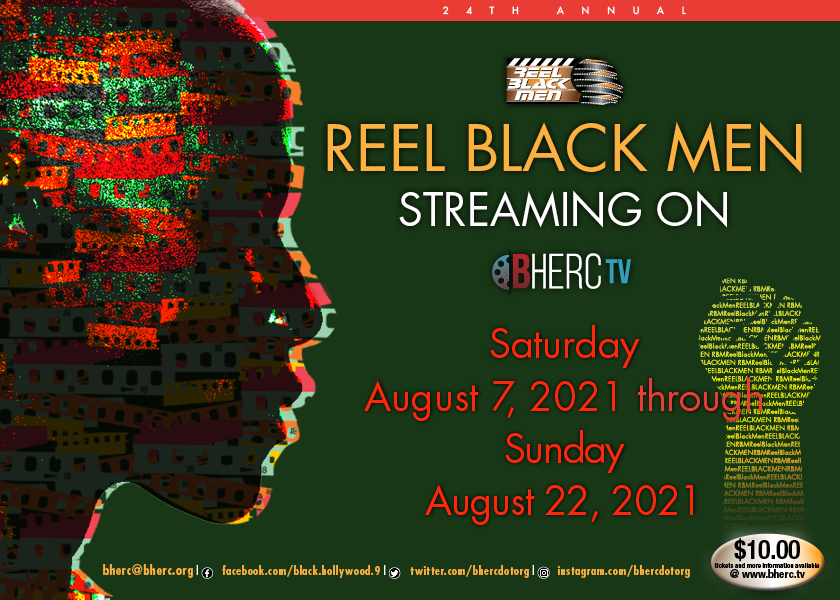 The 24th Annual Reel Black Men Short Film Festival kicks off on Saturday with films from Charles Burnett, David M. Massey, and 19 other Black filmmakers. The festival, which will be held virtually through August 22, is put on each year by the Black Hollywood Education Resource Center. The 21 films being screened came from 500 semifinalists that were culled from 1,700 entries submitted from across the globe.

This year’s line-up is “truly outstanding,” said John Forbes, BHERC’s executive director. “They are great stories that include drama, horror, romantic comedy, documentary, and sci-fi. The content is diverse and tells both historical and contemporary, fictional and non-fictional stories. They are compelling in many cases, including the issue of the Covid-19 pandemic.”

Sandra Evers-Manly, president of the BHERC, is a former president of the Beverly Hills/Hollywood branch of the NAACP, and the cousin of slain civil rights leader Medgar Evers. Last year, she became a member of the Academy of Motion Picture Arts and Sciences. In her continuing efforts to support young filmmakers, the festival will also including a screening of Blind with Temptation, a film by 17-year-old Karston C. Singleton, an 11th grader at the Science Leadership Academy in Philadelphia.

Tickets can be purchased online at http://www.bherc.org

• Charles Burnett, director; Jonathan Burnett, producer: After The LockDown: Black In L.A, explores how Blacks in Hollywood experienced Covid-19 and the social dynamics that make Blacks more vulnerable to the coronavirus. Via Zoom, Charles Burnett, who received an honorary Oscar in 2017, will discuss the film with Debbie Allen (actress, dancer, choreographer, director and producer); Bill Duke (actor, director, producer); Sheryl Lee Ralph (actress, singer, author, activist), Ayuko Babu (executive director and co-founder of The Pan African Film Festival) and others.
• David M. Massey, director: Passage – In 1600, a West African village leader faces a new challenge that endangers his family and village. Massey was Oscar-nominated in 1992 for Best Live Action Short Film.
• Dagmawi Abebe, director/writer: The Ball Method – Alice Ball, a 23-year-old African American chemist living in 1915 Hawaii, fights against racial and gender barriers to find an effective treatment for leprosy.
• Coyo Alexander, director; Dakarai Akil, writer: AMERICA – An African American policeman is involvement in the shooting of an unarmed teen.
• Muhammad Bilal, director/writer/producer: The Blue Cave – Ali, a troubled yet imaginative boy, has one dream in life: to become a screenwriter. Neglected by his mother, brutalized by his stepfather, and bullied by members of the neighborhood gang, he longs for a safe space to write screenplays and immerse himself in the world of his imagination. While searching for a haven, he discovers a magical cave.
• Andre` Campbell, director: Say My Name – A documentary on Kimberly MacLean’s artwork. Working for a year and a half, she paints over 33,000 names of unrepresented people.
• Dr. Thaddeus W. Jones, Jr., director/writer: The Gazelle – A chance encounter with a stranger awakens a secret that leads to a slow hunt.
• Michael McNeil, director/writer/producer, Khalief Kelly, writer: Track a Package – A customer wants to track his package using his phone number.
• Joshua Otis Miller, director/writer: Something Beautiful – A discussion around the way people think about people of color through the eyes of a black person who embodies beauty, success, love and freedom.
• Frankline Nwochuze, director: NWEH (A Tree God) – A young girl becomes her village’s point of attraction.
• Richard B. Pierre, director/writer/producer: An Uninvited Guest – Three White people and one Black man wordlessly enjoy dinner while police brutally assault a disheveled Black man in the front yard.
• Jonathan Rowan, director/writer/producer: Man Down – In the aftermath of the racially charged shooting of an unarmed teenager, an officer of color must decide to stand on the side of the law or seek justice for his community.
• Khalid Sena, director; Ramesh, writer: Concrete Rose – Marcus, a recently released ex-con, has difficulties integrating into his ever-changing community. He quickly becomes enticed to return to his old life but meets an older woman who welcomes him to work in a garden where he finds redemption and peace.
• Jordan Shanks, director/producer: Never Again – Chronicles the dramatic removal of Confederate monuments in the former capital of the Confederacy during the nationwide Black Lives Matter protests of 2020 sparked by the police killing of George Floyd.
• Kreston C. Singleton, director/writer/producer: Blind With Temptation – A boy comes across a fantastic item with a glaring drawback: will he be able to resist using it, or will temptation blind him?
• William H. Smith, director/writer/producer: The Preacher & The Rabbi – The moral and spiritual partnership of Rabbi Abraham Joshua Heschel and the Rev. Dr. Martin Luther King Jr. that inspired their communities to advocate for access, equity, and social justice.
• Mitchell Ugwuezi, director; Joseph Filani, producer/writer: The Message – A world-renowned speaker prepares to address his audience with a controversial speech. But will they listen, or will he lose them altogether, along with his advisers?
• Larry Ulrich, director/writer/producer: I’m Not Special – An 11-year-old with Down Syndrome has a once-in-a-lifetime chance to participate as an athlete in the Special Games. However, as his drug-dependent father struggles with addiction and the demands of fatherhood, his athletic future is placed in jeopardy.
• Lawrence Watford, director/writer/producer: CATHARSIS – A Black woman in mourning confronts the ambitious District Attorney that refused to prosecute the NYPD officer responsible for her son’s death.
• Gerald Webb, director/writer/producer – $TACK$ – Unprecedented times force two fierce rivals to come face to face for the first time in over a decade to close a deal for the most valuable substance on earth.

Bennifer Has Made Our ’00s Dreams Come True and Made Us Realize We Miss These Former Celeb Couples – E! NEWS
Jeffrey Katzenberg, Casey Wasserman And Other Hollywood And L.A. Figures Plan Fundraiser To Back Gavin Newsom Against Recall – Deadline