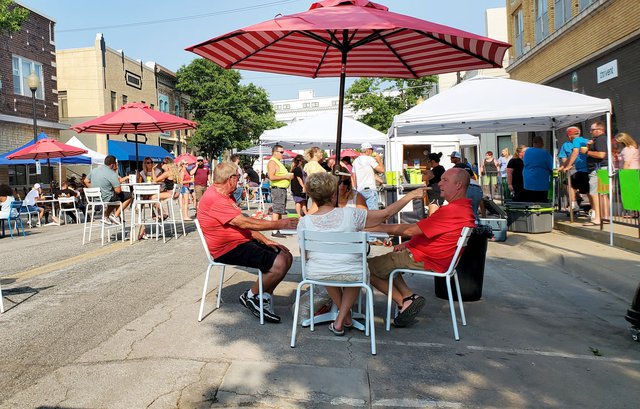 The Great Bend Alive Plaza made its debut Friday evening, with people trying out the new common consumption/entertainment area. Forest Avenue was closed to traffic from Main Street to Williams Street and the block became a zone for pedestrians only.

In preparation for Friday, newly potted plants were placed in front of businesses and lights were added to the trees. At 1 p.m. Friday, the street was closed to auto traffic. Those who entered off of Williams Street could also see the new mural of a World War II pilot by artist ARCY, which was completed in July as a project of the Barton Arts Movement.

Entering the entertainment district through metal arches adorned with balloons, the public could find tables and chairs shaded by umbrellas, food and drink vendors, and activities. The duo Lightfoot and Buehler provided music. Children played corn hole and other games.

For Friday’s kickoff, people could buy drinks from Lumpy’s Bar and Grill and Charlie’s Place, and food and snacks from Lumpy’s, Favor’s Flavors Shaved Ice and Alan Moeder Catering. There was also free bottled water.

GBED President Sara Hayden said the evening activities in the block will be a recurring feature. “The Great Bend Alive Plaza is just going to keep getting bigger and better,” she said.

When Hayden approached the Great Bend City Council for permission to close the street for these events, she said it was one more step in an effort to revitalize the downtown business hub.

For now, the plan is to open the entertainment district on two Fridays every month. The next scheduled Great Bend Alive Plaza is Friday, Aug. 20, from 5-8 p.m. The block closes to traffic at 1 p.m.

Jeffrey Katzenberg, Casey Wasserman And Other Hollywood And L.A. Figures Plan Fundraiser To Back Gavin Newsom Against Recall – Deadline
Charlize Theron Reveals She Had Her “Literal Dream” Party for 46th Birthday – E! NEWS