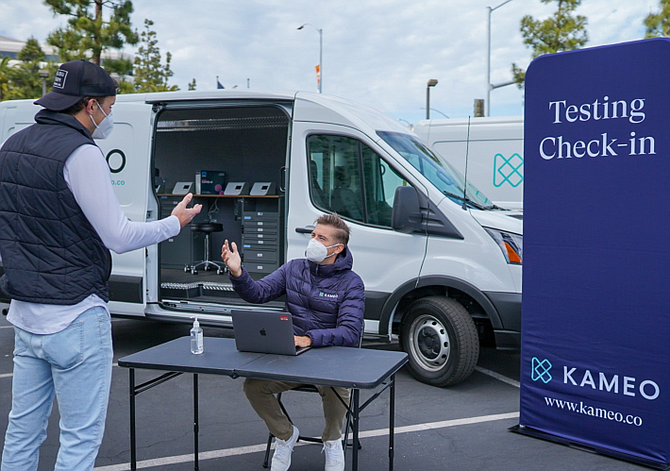 Activity on film and TV sets in Los Angeles has returned to pre-pandemic levels, but ongoing concerns over Covid-19 and the surging delta variant are taking a toll on the cost of those productions.

Vaccine mandates, testing requirements and other stringent pandemic protocols were agreed to in July by studios, networks and guilds, allowing productions to move forward in greater number.

Those precautions, however, carry added expenses. And as the delta variant causes nationwide spikes in Covid infections, the companies that produce films and TV shows now face delays as well as additional financial and logistical burdens.

According to entertainment industry veterans and others who are closely involved in the business of Hollywood, productions are spending an average of 10% to 15% of their below-the-line budgets — the money allocated after star salaries — on Covid-19 safety measures.

“You just have to now build it in, and it squeezes everything else,” said Bill Wilson, the L.A.-based vice president of production at Sculptor Media, a production, finance and distribution company headquartered in New York City. “You’re not getting more foreign sales just because you have to deal with Covid. So, budgets have to be squeezed and tightened, and you have to find efficiencies elsewhere.”
There were 9,791 shoot days in Los Angeles between April and June 2021, according to data released Aug. 5 by Hollywood-based FilmLA, the partner film office for Los Angeles city and county.
That means local work on movies and television series had finally regained levels that were common before Covid-19 threw the industry — and the rest of the world — into turmoil.
The rebound in production activity coincided with June’s statewide reopening in California.
Then on July 19, studios and unions such as the Screen Actors Guild-America Federation of Television and Radio Artists and the Director’s Guild of America reached agreement for the industry at large to get back to work.

The terms of their pact offered short-term fixes to alleviate some production costs, including relaxing some testing protocols while allowing companies like Netflix Inc. to mandate vaccinations for “Zone A” cast and crew members. “Zone A” refers to cast and crew members who work in close quarters without social distancing or personal protective equipment.

It also stipulated that productions must absorb all costs associated with vaccinations and other Covid-related protocols.

These rules, however, didn’t anticipate the impact the delta variant has had on case numbers, or its risks even for vaccinated cast and crew members.

Wilson, who worked as a production executive last year on director Joe Carnahan’s “Copshop,” said the production dealt with resource deficiencies even before protocols were formalized industrywide.

“In the end, we had like 30 people working in the Covid mitigation team between the managers of the team, the nurses and PAs that did the screening, and the disinfection teams and so on,” he said.

“And then the tests themselves were very expensive, and I think we did well over 3,500 tests on that picture. So, we spent a significant amount of money managing the Covid of it all.”

Not all productions are affected equally.
More established operations may benefit from insurance policies that mitigate costs by grandfathering in pre-pandemic health care considerations, according to Sarah Cronin, partner at Washington, D.C.-based law firm Venable and a member of its entertainment and media litigation group.

“Sometimes these policies are written for three- to five-year terms, so these types of Covid-increased costs absolutely should be covered under those policies,” said Cronin, who is also co-chairwoman of the Media Law Resource Center’s Insurance Group’s California Chapter.

“But if you have a policy being placed after Covid, it’s going to have an exclusion because the insurance companies don’t want to cover those additional costs,” she added.

A range of businesses have cropped up around the entertainment industry to provide Covid testing and related services for productions.
Hermosa Beach-based Kameo Health Inc. launched in 2020 to provide protected health information services for Netflix, Paramount Pictures and several other major studios.

Hayto estimates that Kameo has conducted 100,000 tests, including PCR and rapid testing, across productions in the United States since August 2020, at $90-$150 a test. The cost is comparable to a $140 charge for a walk-in polymerase chain reaction test at a local drug store.

But what has made Kameo’s tests particularly enticing for productions is the company’s self-sufficient mobile testing centers and a network of relationships with facilities across the country to produce consistent, reliable and timely results.
“When we get a call to show up in an obscure location, we’ve got our own Wi-Fi, our own power source, and can run a full day’s worth of rapid tests from that location,” Hayto said. “And the contract that we sign with the production partners is that we will deliver any results dropped off by x time by 6 a.m. the next day, or within 12 hours.”
Kameo does not provide vaccinations, but the company’s testing platform includes symptom screening tools, schedulers, push notifications, results delivery systems and detailed record keeping with secure, multitiered access to maintain HIPAA compliance.

“Very quickly we realized just how important it was to keep all this information secure, which is why we’ve invested so heavily in this tech platform,” Hayto said.
The July agreement between guilds and studios expires Sept. 30. With a new project going into production soon, Wilson is not optimistic that cases, protocols or costs will change any time soon.

“People are going back to work kind of in spite of it, and it’s costing them to do it. This industry is not going to stop,” he said. “We really have to get the country vaccinated for this to stop, and until that happens, I don’t think we’re going to see a significant decrease in cases. We certainly need it to ease the cost and complexity of dealing with it.”

For reprint and licensing requests for this article, CLICK HERE.