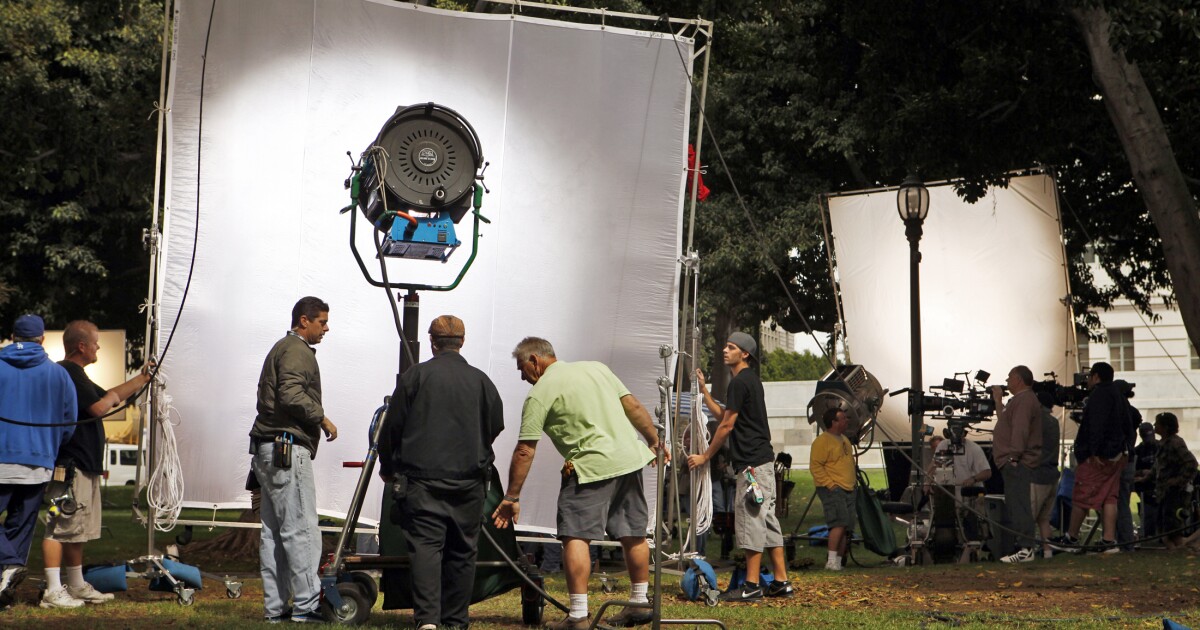 Last month, Ben Gottlieb, a 27-year-old set lighting technician, wanted to show his support for his union’s campaign to improve working conditions on film sets so he wrote an Instagram post calling for an end to 12- to 14-hour shifts.

As with many of his colleagues, the Brooklynite felt burned out after working grueling hours without substantial breaks for much of the last year. Some nights, he was so tired driving home that he felt inebriated. He even thought about quitting — only two years after joining his union, IATSE Local 52.

The post struck a chord, drawing more than 21,000 likes. Gottlieb was soon inundated with messages from industry colleagues sharing their own stories, which prompted him to create a dedicated page called IATSE Stories. In just a few weeks, more than 500 posts have drawn nearly 17,000 followers to the page.

“At what point do we just give people a rest, give people a break, treat it like a real job?” Gottlieb asked. “I think a lot of people are reaching a breaking point.”

Hollywood’s return to production, after pandemic-induced closures caused thousands of job losses has been welcome to many in the industry. But the scramble to make up for lost time — combined with soaring demand for content from new streaming platforms — is taking a toll on crews.

Below-the-line workers are putting in increasingly long hours, with the added pressure of making up for delays caused by COVID-19 outbreaks, Gottlieb and other union representatives said.

“There used to be seasons, so people who worked in TV could take a break, but now, because of streaming, you don’t have that anymore,” said Steve Dayan, secretary-treasurer of Teamsters local 399, which represents transportation coordinators, location managers, casting directors, animal handlers and drivers.

“Because of COVID-19, people are starting to recognize working yourself to the bone isn’t a viable way to live,” Dayan added, noting that drivers who transport cast to and from sets are working 16-hour shifts. “Our crews realize the studios are pushing the limits in terms of health and safety by working excessive hours.”

The push to highlight working conditions on sets comes amid tense contract negotiations between the Alliance of Motion Picture and Television Producers and the International Alliance of Theatrical Stage Employees, which represents film and television crews in the entertainment industry.

IATSE resumed talks with the producers alliance on Aug. 17, after a break to allow for the renegotiation of COVID-19 safety protocols. Among other things, the union is pushing for better wages and longer rest periods for stressed crews.

The union wants producers to allow enough time for crew members to be able to commute home and rest. They also want employers that don’t allow meal breaks to face penalties, according to people familiar with the negotiations.

The turnaround time for crews — the period workers have between leaving the set and returning the next day — varies depending on the production and the union local. Costumers, for example, get 10 hours; for editors, it’s nine; actors can get 12 hours.

One complaint is so-called Fraturdays, where crews work long hours that run from Friday into Saturday, meaning they potentially lose half their weekend before they have to return to work again on Monday.

“When I sign up for a job — I’m accepting that I’m essentially on it 24/7 until its over months later,” wrote one production coordinator in an Aug. 20 post on IATSE Stories.

IATSE and AMPTP, whose members include streaming companies like Netflix, Amazon and Apple and traditional studios such as Walt Disney and Warner Bros., declined to comment.

In 1997, assistant camera operator Brent Hershman died after falling asleep at the wheel of his car as he was driving home from a 19-hour work day on the Long Beach set of the movie “Pleasantville.” The incident inspired Oscar-winning cinematographer Haskell Wexler to make the documentary “Who Needs Sleep” in 2006.

More recently, top cinematographers from IATSE local 600, the international cinematographers guild, joined the campaign, writing to the producers alliance earlier this month to raise their own concerns over the hazards of long, unsafe working hours. Deadline first reported on the letter.

Gottlieb said that IATSE Stories was his own initiative and that union leaders had no role in establishing the Instagram page.

He said he chooses stories that touch on systemic issues in the industry, rather than personal grievances.

The account is managed by Gottlieb and two others in the business.

“It’s overwhelming at times,” said Gottlieb, who has worked on both TV and movie productions. “Sometimes I need to just take a break from it because it does get a little taxing… sort of the worst of the film industry dragged out in front of you all day.”

Some of the worst stories are shared by production assistants, who find themselves earning minimum wage but having to work 12-, sometimes 18-hour days. “A lot of PAs are upset,” Gottlieb said.

Also sharing their burdens are pregnant women and crew members who’d like to start families but don’t feel they can because the hours are too grueling.

Many contributors cite the hazards of driving home after long days on set.

One crew member on a big-budget movie shared an account of how they momentarily fell asleep at the wheel after working a 14-hour, all-night shift. The crew member made it home safely and later raised concerns about the hours with producers, but was told they could stay at a hotel at their own cost.

“This is something I experienced directly,” Gottlieb said. “All of a sudden, you have only a few hours to sleep, and all this pressure builds up and all this anxiety and you’re never allowed to decompress.”

Although most of the posts are anonymous, Gottlieb said he and the other moderators can see submitters’ profiles and are able to verify they work in the industry.

One worker on Aug. 19 described an incident where a department head had died of a heart attack on set a few weeks earlier and crew members were told to keep working. A grief counselor was brought in the next day, but crew weren’t given time to visit the counselor, the worker wrote.

“We have to discuss why the talent often get 12 hour turnarounds portal to portal and the crew doesn’t? Are the actors more important than the crew or are we all not human?”

A September to Remember: Here’s a calendar to help you pick your fun – The Times
Here’s How Kelly Ripa and Mark Consuelos Feel After Dropping Son Joaquin Off at College – E! NEWS