Haile Gerima Is Having a Hollywood Moment. It’s Left Him Conflicted. – The New York Times

Haile Gerima Is Having a Hollywood Moment. It’s Left… 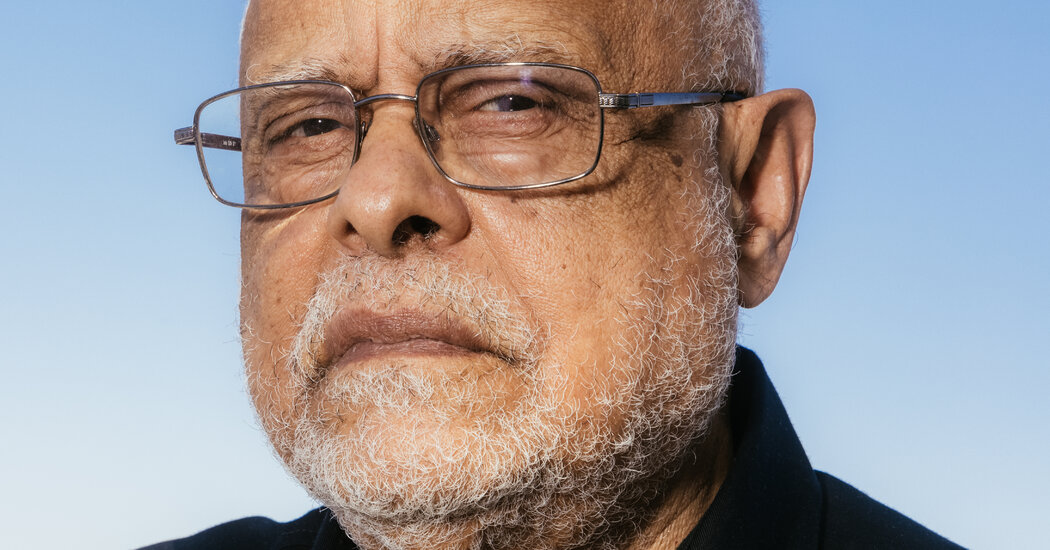 Haile Gerima doesn’t hold back when it comes to his thoughts on Hollywood. The power games of movie producers and distributors are “anti-cinema,” he put it recently. The three-act structure is akin to “fascism” — it “numbs, makes stories toothless.” And Hollywood cinema is like the “hydrogen bomb.”

For decades, Gerima, the 75-year-old Ethiopian filmmaker, has blazed a trail outside of the Hollywood system, building a legacy that looms large over American and African independent cinema.

But as he spoke with me recently on a video call from his studio in Washington, D.C., Gerima found himself at an unexpected juncture: He was about to travel to Los Angeles, where he would receive the inaugural Vantage Award at the opening gala of the Academy Museum of Motion Pictures, which is also screening a retrospective of his work this month. A new 4K restoration of his 1993 classic, “Sankofa,” debuted on Netflix last month.

After 50 years, Hollywood has finally come calling. “I’m going with a lump in my throat,” Gerima said with his typical candor. “This is an industry I have no relationship with, no trust in, no desire to be a part of.”

Gerima tends to speak directly and without euphemism, his words propelled by the force of his conviction. The filmmaker has been at loggerheads with the American film industry since the 1970s, when he was a student at the University of California, Los Angeles. There, he was part of what came to be known as the L.A. Rebellion — a loose collective of African and African American filmmakers, including Charles Burnett (“Killer of Sheep”), Julie Dash (“Daughters of the Dust”), Larry Clark (“Tamu”) and others, who challenged the mainstream cinematic idiom.

Gerima’s first project in film school was a short commercial called “Death of Tarzan.” An exorcism of Hollywood’s colonial fantasies, it provoked a response from a classmate that Gerima still remembers fondly: “Thank you, Gerima, for killing that diaper-wearing imperialist!”

The eight features he has since directed bristle with the same impulse for liberation, employing nonlinear narratives and jagged audiovisual experiments to paint rousing portraits of Black and Pan-African resistance. In a phone interview, Burnett described Gerima’s work as coursing with emotion: “People have plots and things, but he has energy, real energy. That’s what characterizes his films.”

The stark, black-and-white “Bush Mama” (1975) charts the radicalization of a woman in Los Angeles as she navigates poverty and the Kafkaesque bureaucracy of welfare. “Ashes and Embers” (1982) — which opens with the protagonist driving into Los Angeles with dreams of Hollywood before being abruptly stopped by the police — traces the gradual disillusionment of a Black Vietnam War veteran. In “Sankofa,” one of Gerima’s most acclaimed films, an African American model is transported back in time to a plantation, where she’s caught up in a slave rebellion. Other films, like “Harvest: 3,000 Years” (1976) and “Teza” (2008), explore the political history of Gerima’s native Ethiopia.

For the filmmaker and his wife and producing partner, Shirikiana Aina, these visions of fierce Black independence are as much a matter of life as art. Most of Gerima’s movies have been produced and distributed by the couple’s company, Mypheduh Films, which derives its name from an ancient Ethiopian word meaning “protector of culture.” Mypheduh’s offices are housed in Sankofa, a bookstore and Pan-African cultural center across the street from Howard University, where Gerima taught filmmaking for over 40 years. This little pocket of Washington is Gerima’s empire — or his “liberated territory,” as he likes to call it.

“When I think of Haile’s cinema, I think of the cinema of the maroon,” Aboubakar Sanogo, a friend of Gerima’s and a scholar of African cinema at Carleton University in Ottawa, Canada, said in an interview, invoking a term for runaway slaves who formed their own independent settlements. “It’s very much a cinema of freedom. Hollywood is the plantation from which he has escaped.”

If Gerima is now ready to dance with the academy (which, incidentally, has never awarded a best director Oscar to a Black filmmaker), it’s because of the involvement of a kindred soul: Ava DuVernay.

The “Selma” filmmaker, who co-chaired the Academy Museum’s opening gala, has been the driving force behind the Haile-ssance of 2021. Array, DuVernay’s distribution and advocacy collective, spearheaded the restoration of “Sankofa.” The company also rereleased “Ashes and Embers” on Netflix in 2016, in addition to distributing “Residue,” the debut feature by Gerima’s son Merawi, last year.

Speaking by phone, DuVernay said that in collaborating with Gerima, she felt she had come full circle: Years ago, she modeled Array on the example set by Gerima and Aina’s grass-roots distribution initiatives.

“I was very influenced by this idea that your film is an extension of you, and it does not have to be given away to someone else to share with the world,” DuVernay said. “The self-determination of self-distribution, that was a radical idea to me. I didn’t have to go around begging studios — I could make my film and be in conversation with an audience independently.”

It was a strategy Gerima and Aina forged during the initial release of “Sankofa.” The film gives galvanizing form to an idea that courses through all of Gerima’s work: that Africans are not the victims of history, but its heroes. “I always felt that slavery is not about brutal white people,” he said. “Slavery is about Black Africans refusing to be slaves. The consequences of that cannot be the dominant aspect of a film; otherwise, you participate in creating Hollywood victims.”

But getting this film — born of unprecedented co-productions with Ghana, Burkina Faso and other African countries — seen by Black audiences in America required its own kind of fearless independence. When a well-received premiere at the 1993 Berlin International Film Festival did not lead to any American distribution deals, Gerima and Aina did what they knew best: They turned to their community.

They rented a local cinema in Washington, and held screenings and meetings to spread the word. The response was overwhelming: The theater was packed for 11 weeks, and soon they were raising money for a second print to show in Baltimore, where it ran for 21 weeks. As community and cultural groups started reaching out from Illinois, Kansas, Arkansas, California and elsewhere, Gerima and Aina slowly established what they call the “Sankofa family.”

“They were our airport in every state,” Gerima said. “Underclass Black people put this movie on the map of the world.”

Now, nearly 30 years later, a pristine restoration of “Sankofa” is streaming on Netflix in multiple countries. There’s something poetic about the movie introducing new audiences to Gerima’s legacy: Its title derives from a Ghanaian term that translates loosely to “retrieving the past while going toward the future.”

The phrase was on my mind as I spoke with Gerima. He was in his editing “cave,” as he described it, and a picture of his father was on the computer screen behind him, the image zoomed into the man’s ear, as if he were listening in. A writer of political plays, Gerima’s father figures prominently in “Black Lions, Roman Wolves,” a documentary about the Italian invasion of Ethiopia in 1935 that the filmmaker has been editing throughout the pandemic. Gerima said it’s been stuck in postproduction because of “surrealistic” negotiations with Istituto Luce Cinecittà, Italy’s state-owned film company, over newsreel footage from the war.

He recalled that when he premiered “Adwa” — his documentary about the 1896 victory of Ethiopian forces against Italian invaders — at the Venice Film Festival in 1999, the press had criticized Istituto Luce for not participating in the production. “So they wrote me a letter saying, ‘In your next film, we will participate.’ But every time a bureaucrat changes, the policy changes. And I have to start the A-B-C-D of everything again.”

It is experiences like these that make him wary of institutional support. “I don’t trust eruptive social discourse,” he said. “The well-meaning people at the Academy Museum — what happens when they are not there anymore? Who comes in? And what happens to the inclusiveness idea, then? This is the anxiety I have.”

Aina, who joined us for the tail end of our interview, seemed more cautiously optimistic as she spoke of the museum’s Vantage Award. “I hope that it means that our work can get a little easier,” she said simply. “We just want to be able to have the capacity to make our movies, and to leave something in place that future filmmakers can incorporate into their new visions.”