How Hollywood Reacted to the Attack on Pearl Harbor…

In his latest book about the history of Hollywood, “Hollywood Victory: The Movies, Stars, and Stories of World War II,” IndieWire’s own Managing Editor Christian Blauvelt explores how the industry responded to the onset of World War II and the need to defend the American way of life (including, of course, the culture it held so dear). In the book, out early next month, Blauvelt digs into how the both the films of Hollywood and the people who made them reoriented their work and lives to serve the war effort and beyond.

In our exclusive excerpt below, Blauvelt unpacks how Hollywood reacted to the attack on Pearl Harbor, thanks to a ticking clock look back at how the news (and its horror) spread throughout Hollywood and beyond.

“The sun is shining, the grass is green / the orange and palm trees sway” goes the opening of Irving Berlin’s oft-discarded verse to “White Christmas.” It could have described the quiet Sunday morning Hollywood experienced at the start of December 7, 1941. Berlin intended to take a day off of work on “Holiday Inn,” the movie based on his own idea that was set to feature his new song.

Just a few days before, Bing Crosby recorded the version of “White Christmas” he’d lip-synch to in the movie in a rapid-fire studio session on the Paramount lot. Berlin considered “White Christmas” to be his baby, and he hid in a corner of the studio behind some soundproofing partitions to make sure it sounded exactly the way he heard it in his head. Now here was a pleasant Beverly Hills Sunday when he could let that stress melt away.

In fact, music was on the minds of many in Hollywood that December 7 morning. The New York Philharmonic’s Sunday performances on CBS Radio were always among the most popular broadcasts each week. That morning, listeners heard conductor Artur Rodzinski lead Shostakovich’s Symphony No. 1 and Arthur Rubinstein playing Brahms’s Piano Concerto No. 2.

At 11:25 a.m. Pacific Time, newsman John Charles Daly cut in to the broadcast and announced, emotion straining his voice, that Pearl Harbor had been attacked by Imperial Japan. Just an hour and seven minutes earlier, the first wave of 182 torpedo bombers and Mitsubishi Zero fighters had begun unleashing their payloads on American battleships and cruisers in Pearl Harbor as well as airfields around Oahu. The second wave of 171 Japanese aircraft was still attacking at the very moment of Daly’s broadcast. 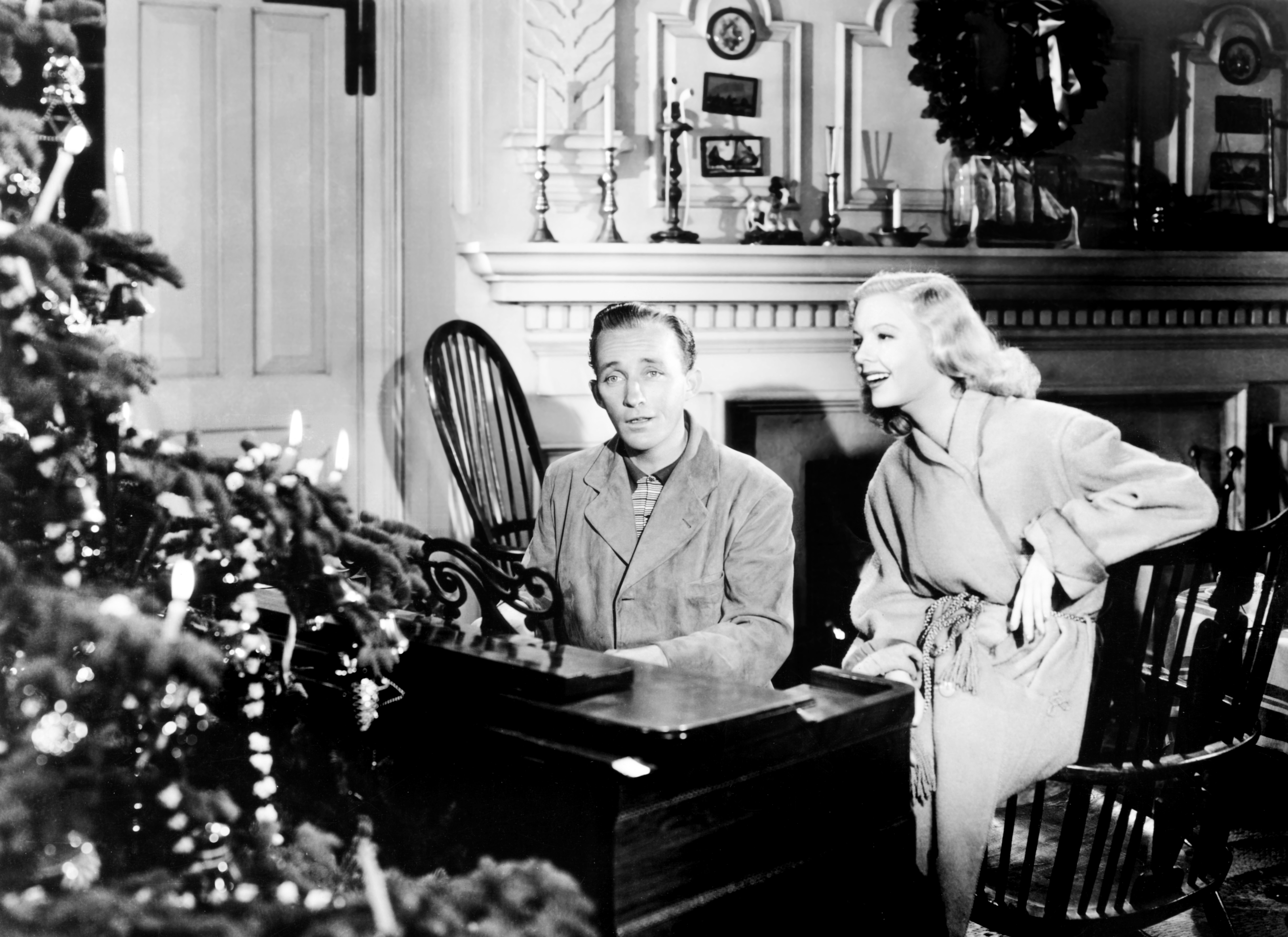 Bing Crosby recorded the version of “White Christmas” that appears in “Holiday Inn” in the week leading up to the Pearl Harbor attack.

The result was trau­matic: 2,403 Americans had been killed with 1,178 injured, and six of the eight US battleships present were damaged — four of them sunk outright. It had proved what the Warner brothers, Anatole Litvak, Darryl F. Zanuck, John Ford, Jimmy Stewart, and so many others had known: America’s entry into the war was inescapable.

Was America prepared or had it been caught unaware? To many, it appeared like the latter. But that feeling that we should have seen this attack coming quickly turned into a resolve to never let it happen again.

Putting it another way: the Japanese attack on Pearl Harbor was a tactical psychological victory for Hirohito and his empire, but a strategic psycholog­ical defeat. The terror inspired by those 353 planes traversing the length of Oahu from its northern coast quickly turned to determination. And strategically, Japan achieved almost none of its objectives: all of the battleships they’d sunk would be raised, save for the Arizona, and returned to service and to the fight. Plus, none of the Pacific Fleet’s three aircraft carriers had been present.

Japan could possibly have struck a more crippling blow if they had proceeded to launch a third wave from the six carriers they had parked north of Oahu, one that could have destroyed the military infrastructure on the island itself. But that would have required extending the attack beyond the 90 minutes that it had taken — to the point where any third-wave planes could have only returned to their carriers at night. Admiral Chuichi Nagumo, who had masterminded the attack, decided a third wave wasn’t worth the risk: most of the twenty-nine Japanese planes the US forces did manage to shoot down during the attack itself came during the second wave. With a third wave, the Americans were sure to be even more prepared.

A smarter tactic, and one that the Imperial Japanese Navy considered, was an invasion of Oahu outright. That might have required only 10,000 to 15,000 soldiers, but the Imperial Army, even more disconnected from the Imperial Navy than the US Army was from the US Navy, would never have allocated the resources. Japan wanted to cripple American naval power so that they could begin their lightning conquests of the Philippines, Malaya, and the Dutch East Indies (Indonesia) with less oppo­sition from the only other major Pacific power.

But it’s hard to see what they accomplished at Pearl Harbor other than a senseless loss of life and a near instantaneous dispelling of American isolationism, previously so intractable. The 20th Century Fox film “Tora! Tora! Tora!” (1970) depicted the Japanese navy’s commander in chief Admiral Isoroku Yamamoto (played by Sô Yamamura) saying, “I fear all we have done is to awaken a sleeping giant.” That line is almost certainly the invention of that film and not a historical quote, as has been widely thought. But it feels so right because it’s essentially what Japan had done. 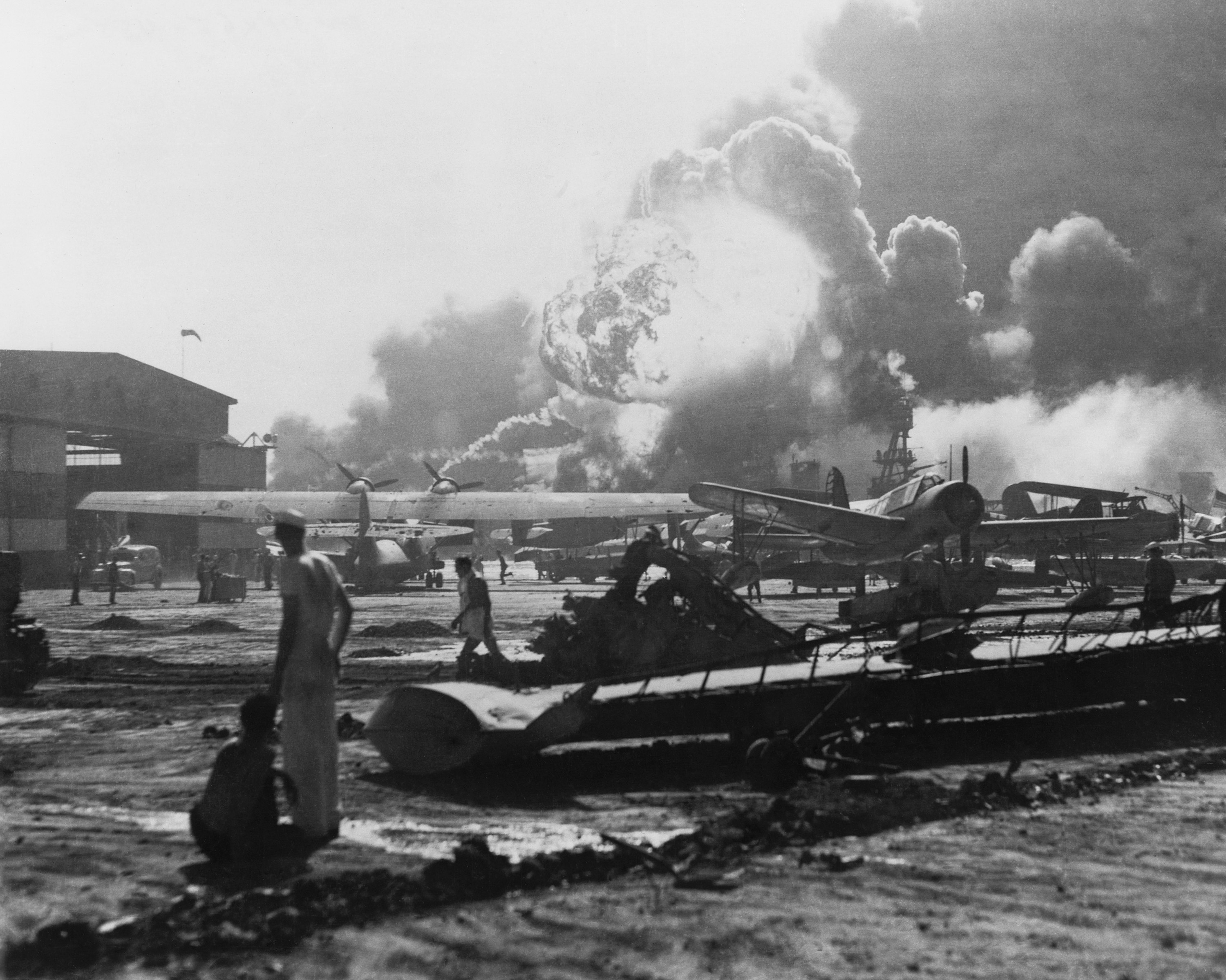 Attacks from Japanese aircraft occurred all over Oahu, including at the Hickam Field air base, not just at the harbor proper.

Daly’s news of the attack at 11:25 a.m. shook Hollywood like a thunderclap. Imagine the disrup­tion to the film productions that were shooting that morning. Ginger Rogers was on the set of Fox’s “Roxie Hart” (1942) when the word came down. “The sound stages were filled with radios giving out fresh information,” she later said. “The sound booth had to block out the squeaking from midget radios in the middle of a take, and much film was wasted during the time because we were so eager to hear the news.”

Orson Welles, the boy wonder turned instant pariah after Citizen Kane (1941) rankled Tinseltown’s many William Randolph Hearst aco­lytes that summer, spent much of his December 7 rewriting the opening to radio essayist Norman Corwin’s “Between Americans,” which Welles was hosting that night on CBS’s “Gulf Screen Guild Theater.” Noting the day’s events, he concluded, “This is a time for energetic and unashamed patri­otism on the part of all of us. I know we all agree to that because I know that none of us will be satisfied with anything but complete victory.”

Among the less productive that morning, Frank Sinatra, already a superstar since scoring the first-ever Billboard number one hit with “I’ll Never Smile Again” 16 months earlier, was still asleep at Lana Turner’s house after an all-night party. Clutching his hungover head, he bristled as Turner’s mother stormed in to share that America was now at war.

Alcohol also accompanied the news for John Ford. He and his wife, Mary, were having a leisurely luncheon at Rear Admiral Andrew Pickens’s home in Alexandria, Virginia, when the War Department suddenly called. Jimmy Stewart — foresighted enough to have enlisted in the Army nine months before Pearl Harbor — learned of the attack from Moffett Field, near San Jose, where he had recently been promoted to corporal. William Wyler and John Huston were playing tennis when Wyler’s wife, Talli, came running out and interrupted their game. The direction of the films the two men were working on at the moment — “Mrs. Miniver” (1942) and “Across the Pacific” (1942), respectively — would change in the months ahead due to America’s sud­den involvement in the war.

As that next line of Berlin’s verse goes, there’d “never been such a day, in Beverly Hills, L.A.” 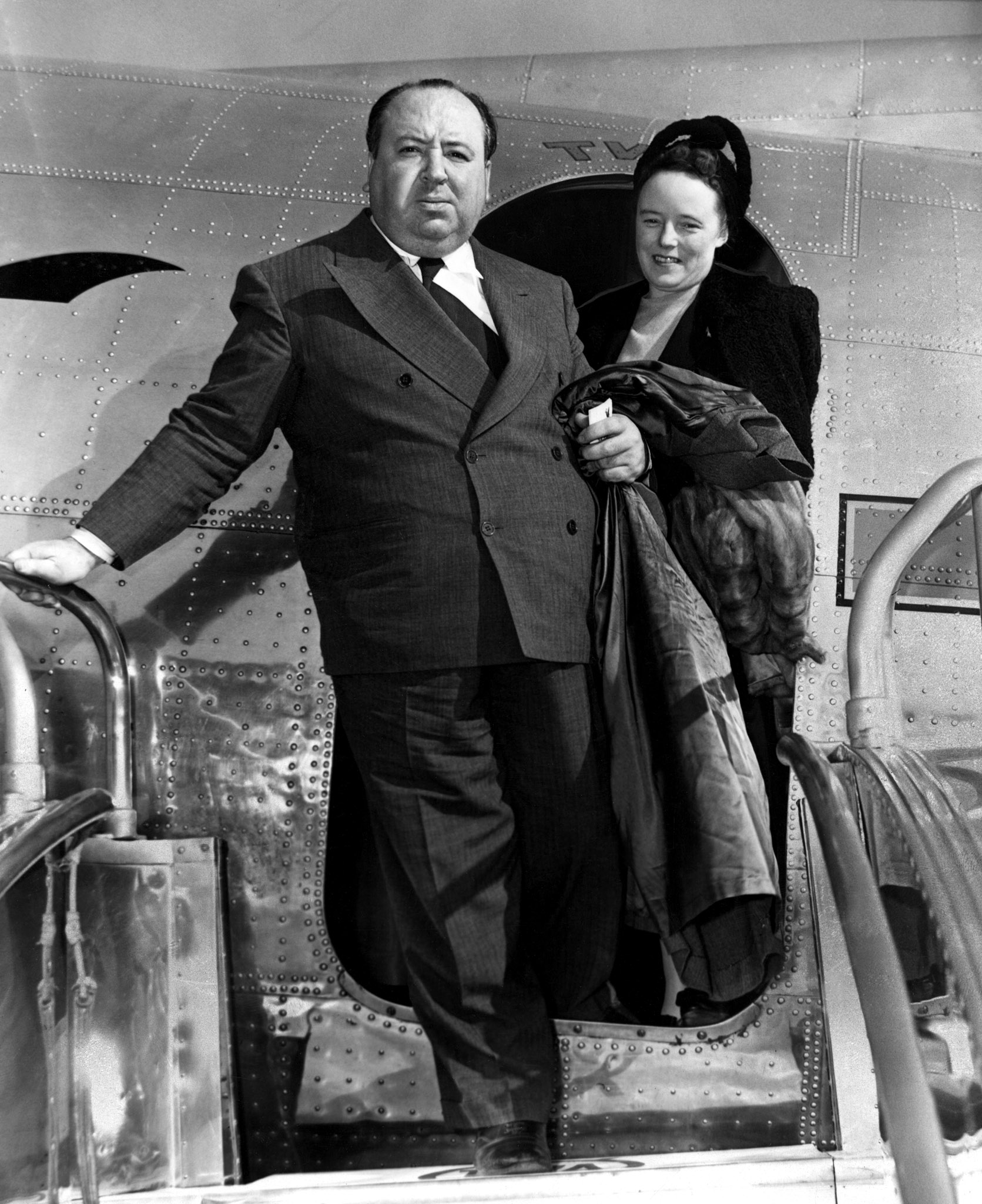 A few weeks after Pearl Harbor, Alfred Hitchcock and his wife and creative collaborator Alma Reville arrived in New York City to film scenes for “Saboteur,” about Nazi agents living in America. On Dec. 7, Hitchcock and his art director Robert Boyle were working on the film at Selznick’s Culver City studio when someone threw open a door and shouted to them that Pearl Harbor had been attacked. “And we went right on working,” Boyle said. “It was just too much to take in, and there wasn’t anything we could do about it anyway.”

Walt Disney, who’d just scored a hit with “Dumbo” — his only major hit of the 1940s, in fact, and enough of a success that it helped relieve the financial burden on his studio — was at home listening to the New York Philharmonic, like so many others, when he heard Daly’s announcement. Disney thought his rocky 1941 might have a quiet ending; instead the year went out with a bang. The next day, Disney’s studio manager called him early in the morning.

“Walt, the Army is moving in on us,” he said. “They came up and said they wanted to move in. I said I’d have to call you and they said, ‘Call him, but we’re moving in anyway.’” The US Army stationed 500 troops at Disney’s Burbank campus for the next eight months — it was the only Hollywood studio ordered to accommodate a garrison during the war. The expansive facilities were the perfect place to quarter troops. It was near Los Angeles, but not too close to incite a panic.

This force would be stationed there just in case a Japanese invasion of the West Coast was imminent; it was not a coincidence these soldiers were from the 121st Anti-Aircraft Artillery Gun Battalion. They used a soundstage to repair equipment and were poised to defend any of the nearby aircraft factories that might come under attack. Disney also accepted a $90,000 contract to make 20 films for the Navy.

In a very different engagement on December 8, the local police, at the order of the federal gov­ernment, raided the Silver Legion’s compound near Pacific Palisades and arrested the 50 supporters of the Fascist movement there who were maintaining its facilities. Its leader, William Dudley Pelley, was ultimately sentenced to two to three years in prison for violating an earlier probation by creating a secret military organization.

Also on December 8, producer Hal Wallis at Warner Bros. made a fateful decision. A play that had come across his desk called “Everybody Comes to Rick’s” suddenly had new relevance. Written by Murray Burnett and Joan Alison, it seemed like the perfect metaphor for America’s recent history. It just needed a new title.

Three days later, on December 11, Germany declared war on the United States, in what histo­rians think was a decision made by Hitler himself, without consulting his advisers. German foreign minister Joachim von Ribbentrop summoned the American chargé d’affaires, Leland B. Morris, to his office in Berlin and handed him the declaration. To the words printed on the page severing diplomatic ties, Ribbentrop added an extra verbal dagger aloud.

“Your president has wanted this war! Now he has it.”

Sign Up: Stay on top of the latest breaking film and TV news! Sign up for our Email Newsletters here.