Near strike by Hollywood crews could be just the… 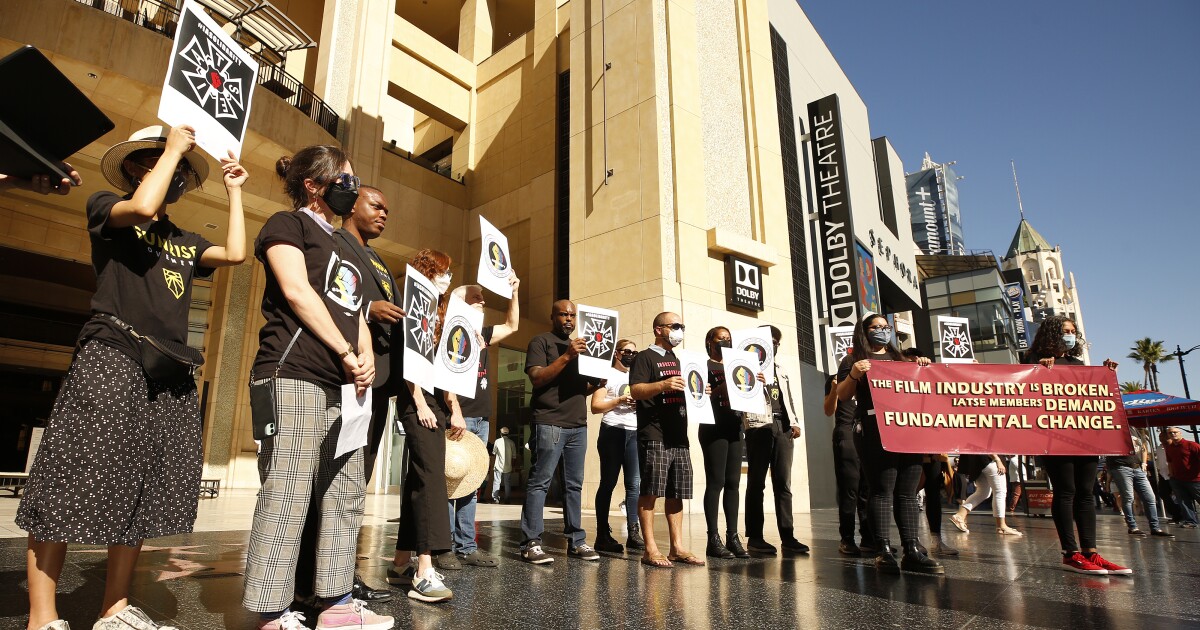 The day before Los Angeles-based art department coordinator Crystal Hopkins voted against her union’s proposed new contract, she stepped down as president of Local 871.

Hopkins said she was resigning from the post she won in 2018 in part because of concerns about the new agreement negotiated by the International Alliance of Theatrical Stage Employees.

“I couldn’t publicly carry, or in good conscience support, a deal that I felt did not reflect the will of the membership,” Hopkins said in an interview.

The resignation was a blow to the union’s leaders, who have long counted on the heads of its various locals — representing costumers, grips, prop masters, makeup artists and other film set workers — to rally behind the contracts they negotiate.

Although the contract was narrowly ratified, a slight majority of members in IATSE’s West Coast locals rejected the proposed deal, reflecting deep discord within the ranks.

The close vote portends a new era of labor activism inside the 128-year-old union and could pose a clear challenge to the leadership of IATSE President Matthew Loeb, union members and labor experts said.

Loeb, who was first elected in 2008, was appointed by union delegates to another four-year term in July after he ran unopposed. But Loeb could face opposition in the future from younger, more militant members who’ve grown impatient with worsening working conditions and IATSE’s long tradition of avoiding nationwide walkouts. IATSE members in October overwhelmingly supported a strike authorization vote for the first time in its history.

“I would be shocked if there is not a wave of activist-driven changing of leadership throughout most of the locals,” said Jason Brotman, an assistant editor and co-chair of the young workers’ group at Local 700, the Motion Picture Editors Guild. “Members who started their career in the wake of the Great Recession have very little tolerance for status quo thinking. The IA is going to be a much more activist union going forward.”

“I think it’s pretty shocking,” said Steve Ross, a history professor at the University of Southern California who specializes in Hollywood labor unions. “Rank-and-file workers feel they were not listened to.”

For his part, Loeb has hailed the contract, even calling it a “Hollywood ending.”

“From start to finish, from preparation to ratification, this has been a democratic process to win the very best contracts,” Loeb said in a recent statement. “The vigorous debate, high turnout, and close election, indicates we have an unprecedented movement-building opportunity to educate members on our collective bargaining process and drive more participation in our union long-term.”

Loeb cited a number of important gains in the new contract, which covers 60,000 film and TV industry workers nationwide.

The contract provides 54 hours guaranteed rest after five-day weeks and 3% wage increases in line with those of other unions. Producers also agreed to boost compensation for the lowest-paid crafts and cover a $370-million deficit in IATSE’s health and pension plans, which faced higher costs during the pandemic.

“Everybody got a little something out of this contract,” said Hollywood makeup artist Geneva Nash-Morgan, who has been in the union 33 years. “This is one of the best contracts I’ve ever seen.”

But, after month of negotiations, many union members expected more. They contended that the agreement did not do enough to improve working conditions and reduce long hours on sets, a long-standing complaint. Crews could still work 14-hour days, for example.

While IATSE leaders had started negotiations with producers in May, the mood among workers shifted this summer and fall as the talks dragged on.

“The conversation had changed and I don’t know that it was given the space and the deference that it truly deserved,” Hopkins said. “There was just this whole like instantaneous culture shift.”

“Anybody that was on the fence said, ‘You know what? Enough is enough,’” said Brotman, who voted against the contract. “There is now grassroots connection and communication between members across the industry and there’s literally no way to stop that.”

Local 80, which represents grips like Patrick Blake who haul heavy equipment, had the biggest margin of no votes among West Coast locals, with 70% of 2,616 ballots rejecting the contract.

“It’s just enough to keep us all going without ruffling too many feathers along the way,” said Blake, a 26-year industry veteran. “We’re going to be in another impasse in a short amount of time because this is just a pacifier.”