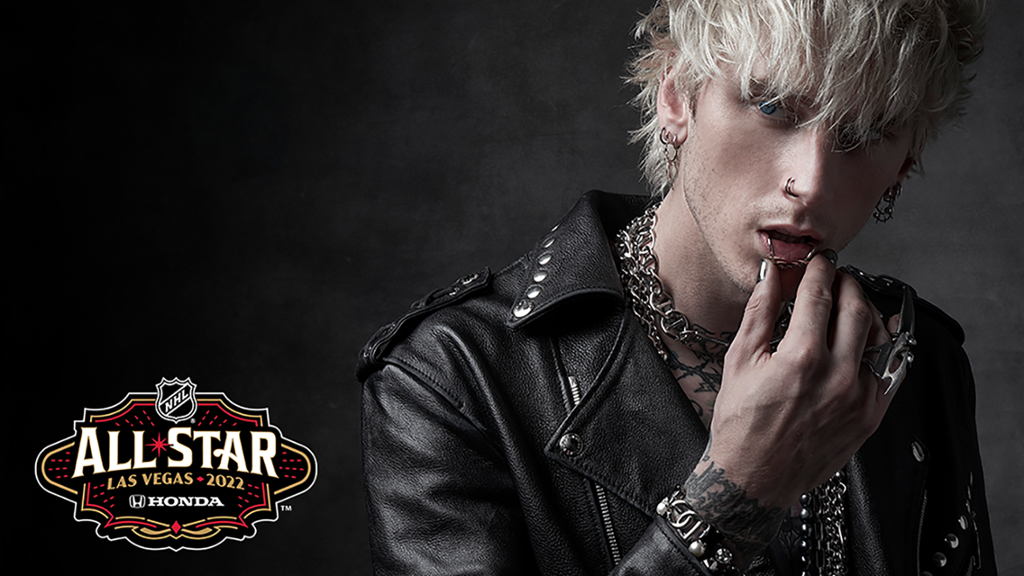 NEW YORK – Platinum-selling recording artist Machine Gun Kelly will headline the entertainment for the 2022 Honda NHL® All-Star Game on Saturday, Feb. 5 at T-Mobile Arena in Las Vegas, the National Hockey League announced today. Machine Gun Kelly will take the stage during the second intermission presented by Ticketmaster. His performance will be televised live as part of the national broadcast of the NHL All-Star Game on ABC in the U.S. and on Sportsnet and TVA Sports in Canada at 3 p.m. ET / 12 p.m. PT.

The Vegas Golden Knights and city of Las Vegas will host the 2022 Honda NHL® All-Star Weekend, Feb. 4-5. The All-Stars will showcase their talents in the 2022 NHL All-Star Skills™ presented by DraftKings Sportsbook on Friday, Feb. 4 (7:30 p.m. ET / 4:30 p.m. PT, ESPN, Sportsnet, TVA Sports) before facing off in the 2022 Honda NHL® All-Star Game on Saturday, Feb 5. Tickets to both events are available for purchase here.

Machine Gun Kelly is a multi-hyphenate talent with an impressive career that started in Cleveland and has made him a globally known star in both music and film. His most recent album, Tickets To My Downfall, was released on September 25, 2020 and debuted at #1 on the Billboard 200. Tickets To My Downfall was the #1 contemporary rock album of both 2020 and 2021, and has sold over 2.5 Million copies worldwide with over 3.6 Billion streams. He has won multiple MTV VMA, iHeart and Billboard Awards including being crowned Top Rock Artist and Top Rock Album by Billboard for 2021.

For the latest event details, visit NHL.com/fans/all-star and follow @NHL and @PR_NHL. Additional details related to the 2022 Honda NHL® All-Star Weekend will be announced in the coming days. Fans can join the conversation by using the official hashtag #NHLAllStar.