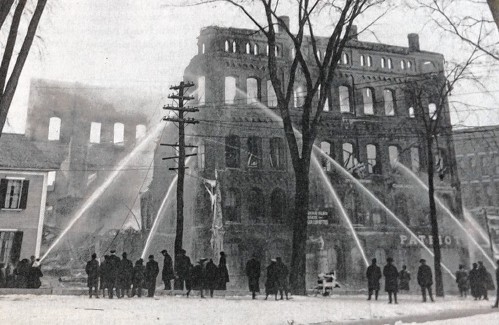 As I sit contently gazing from my home toward the surrounding forest, my thoughts wander.

The temperature hovers near-zero with plans to plunge lower in the darkness of the approaching night. The brilliant white snow provides a clean palette to the shadows cast by the brilliant setting sun. It is a cold winter day in Concord, people have retreated to the warmth of their homes and all manner of social media and other technology to occupy themselves as darkness descends. There was a time when the constraints of a severely cold winter day were viewed with great concern by those living here in our town a century or more ago. Their views of entertainment were not a concern until their basic needs for a cold winter day were fulfilled, plenty of seasoned firewood, a hot stew simmering and enough candle to provide light on this dark night so that a book may be read by the blazing fireplace with that nourishing bowl of stew.

It was my grandfather’s father that enjoyed his boyhood during the cold winters of the 19th century here in Concord. His father arrived as an adult with his brothers from Ireland without providing direction to entertain his young son. My great grandfather explored the surrounding forest during each season with his young friends seeking ways to spend his young life. The winter days were a bit more challenging for him but with a quest for adventure, his days were fulfilled. During the winter months, he would join with his friends as they gathered and skated across Horseshoe Pond, having cleared the ice of the winter snow with their heavy wooden shovels they enjoyed the brisk temperatures as they sailed across the pond with their somewhat primitive strap on blades. A fire was sure to accompany the skaters to provide warmth and a centerpiece for interaction with one another as well as the local young ladies that averted shyness and joined them. Around the fire, they would banter the day away with plans for the next event.

Grandfather spoke of his ventures sledding down the hills of Concord, in particular the steep unpaved streets. As a North End resident, a favorite was the Rumford Street hill, where the young boys and girls gathered near the top of Church Street. The bygone youths of Concord mounted their wooden sleds and enjoyed a quick trip to the bottom of the hill, sometimes traveling as far as the base of Penacook Street. The city of Concord closed the Rumford Street hill each year when the deep winter snow arrived. Many additional steep streets were closed to the joy of the Concord children, safe sledding always a keen winter event.

When White Park was opened in 1884, the large lower pond was cleared by the city and provided idyllic skating with the granite bridge a fitting background. Bonfires were a weekly event for the older children at White Park as the teenagers mingled with a sense of social delight. When skating and sledding lost the evening luster the older teenagers would venture down to Main Street in front of the State House and hire a sleigh led by horses laden with bells to travel the back roads about town as songs were sung and worries were very few.

With the young children entertained and the teenagers engaged in their independent activity, the mothers and fathers sought their own forms of winter entertainment. There were games of cards at home and refreshing mulled hot cider as well as other spirits. The adults would travel from home to home enjoying meals and craving conversation, for their lives were limited socially and usually consumed by chores. Concord boasted a fine theater down on Main Street that was often attended by the aging population, White Opera House provided some of the finest entertainment available. There were numerous performances provided by theater troupes. My grandparents boasted of the many ventriloquists, hypnotists, poets, comedians, choirs and orchestras they enjoyed at the White Opera House. During the warmer months, the parents also ventured to the many carnivals and fairs with their children not far from the White Opera House. Our ancestors would sing, dance and cook with one another or simply “window shop” as they walked along Main Street on a winter eve. There were multiple traveling diners along the street offering anything desired from beverages to light meals, very popular with the young and old.

As the years progressed the options for entertainment during the long Concord winters broadened. In my youth, the Concord Theater and Capitol Theater were favorite destinations on a Saturday afternoon. As the years have passed and the cold winter days visit, my thoughts no longer beckon me to the frozen ponds and hills of Concord. Though I do enjoy a brisk walk on a starry winter night with my wife, the warmth of the fireplace is starting to sound more alluring to me. As my grandfather before would attest, a clean sheet of parchment paper, a fine quill and an active imagination provide wonderful entertainment, especially when accompanied by a glorious setting sun casting shadows upon the freshly fallen snow.