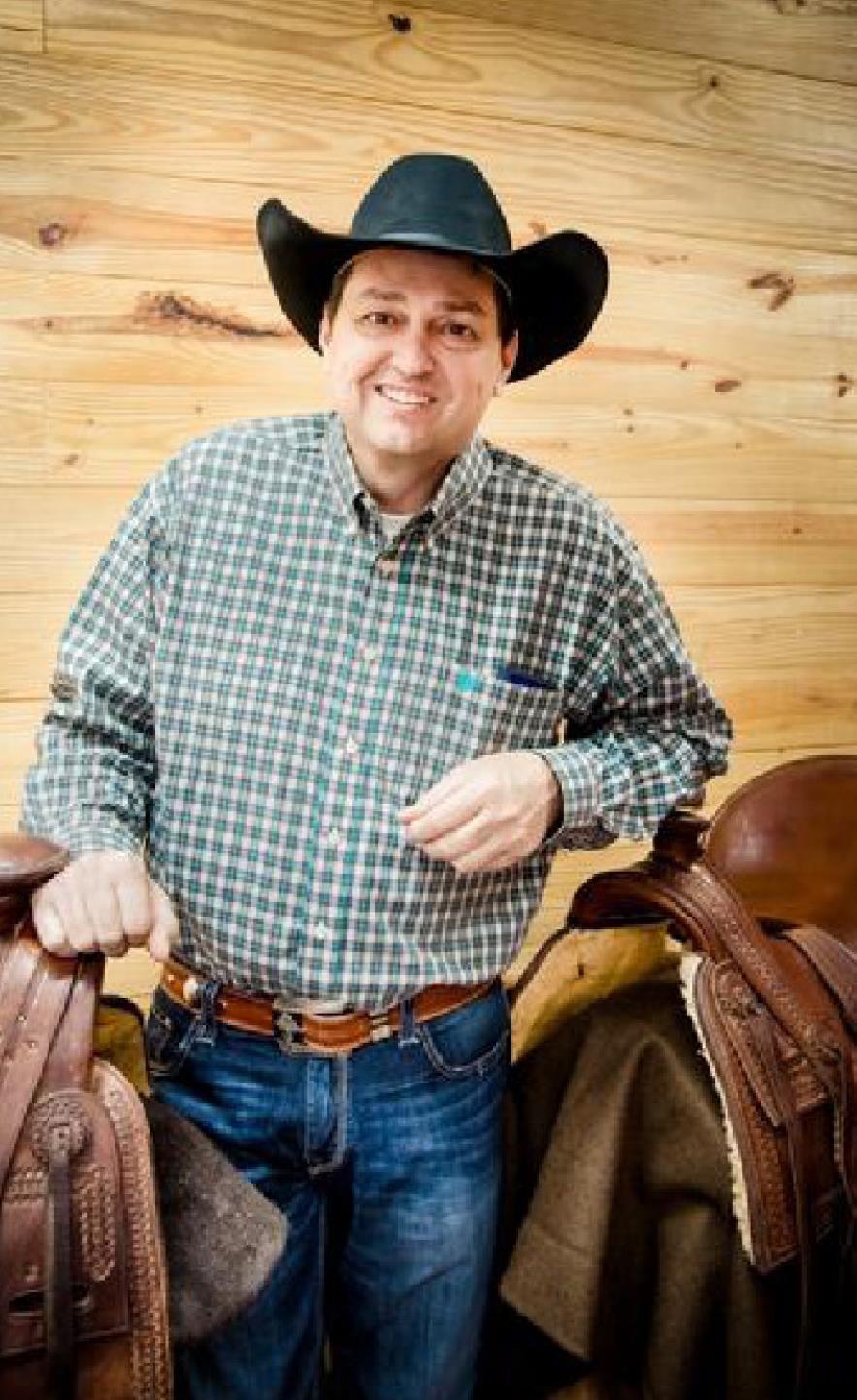 “True Grit.” That classic Hollywood western movie was remade in 2010. The characters in the film were equipped with authentic leather holsters, gunbelts and saddles – hand-made by a craftsman located in rural Kansas.

David Carrico is the founder and owner of Carrico Leatherworks, the business that produced these period leather items for the film industry and others. He operates the business from his home place near Edna, where he was born and raised. He is the fourth generation on the family farm. Son Denton, a K-State student, is the fifth.

“My dad made me a leather belt when I was a kid,” David said. He grew up cowboying and working cattle. “I learned to make these things out of leather because I couldn’t afford to buy them,” David said with a smile.

He found he enjoyed making leather goods. People who saw his products would often ask if he could make them one like it, too.

David went to Coffeyville Community College where he took a living history class. He became fascinated by American history, connected with some Civil War re-enactors, and joined in re-enactments himself. He then applied his leather-working skills to make authentic period pieces such as belts, holsters, and saddles that actors could use. He also met and married his wife Deena, a Pittsburg State grad who is now a teacher.

David went on to K-State where he earned a degree in agricultural education. At the time of graduation, there were no teaching jobs open so he decided to continue to do leatherwork.

David started making more of the authentic Cavalry leather goods. “We used to go around to re-enactments and set up a table to sell our handmade period gear,” David said. “Now, with the Internet, we don’t even have to go to those” because buyers purchase his products online.

David has produced multiple items for the film industry.

For movies set in the Civil War era, Civil War re-enactments make great content for filming because the participants are already authentically dressed. “You have a camera-ready man and a camera-ready horse,” David said. When he participated in those filmed re-enactments, David would visit with the prop crew to get ideas. He also visited Fort Riley’s cavalry museum and the Kansas Museum of History in Topeka to gather authentic designs.

“I don’t build modern saddles because I’m so busy with the period stuff,” David said. Some customers are re-enactors, some are Hollywood film producers, and some simply want authentic period cowboy gear. He also rents items for Hollywood movies.

David’s handmade leather goods have been included in films such as News of the World with Tom Hanks; The Son with Pierce Brosnan; The Magnificent Seven with Denzel Washington and Chris Pratt; and True Grit remake with Jeff Bridges and Matt Damon.

For the movie Hostiles starring Christian Bale, David was hired as a Cavalry advisor to teach the actors how to ride like Cavalry soldiers. He’s worked with producers Bill Kurtis and Ron Howard. His products were even included in the Japanese-themed movie The Last Samurai with Tom Cruise.

Carrico Leatherworks has shipped products across the U.S. and beyond. It’s an impressive record for a business located in the rural community of Edna, population 442 people. Now, that’s rural.