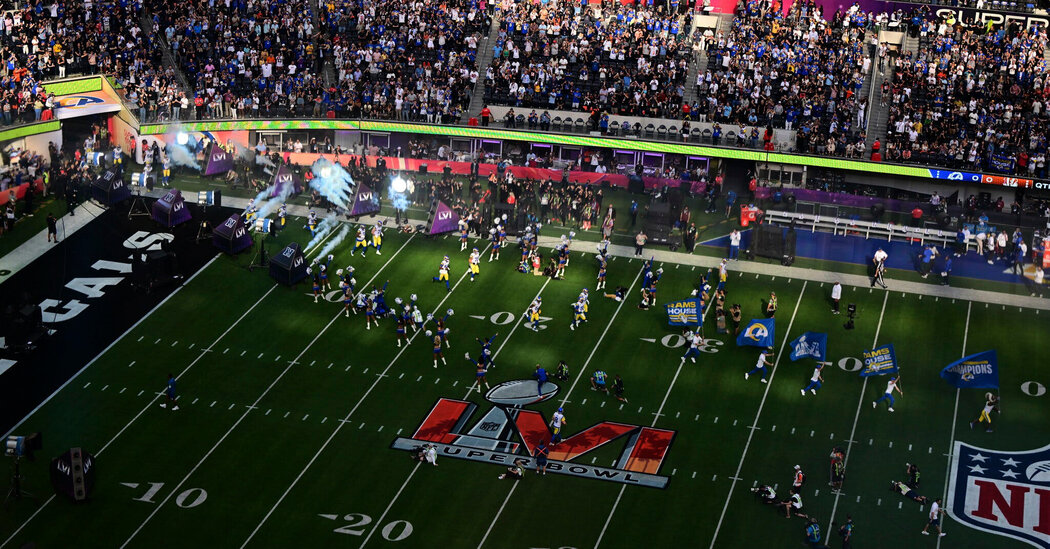 INGLEWOOD, Calif. — Blue and yellow confetti rained down on the field after the final whistle blew in the Super Bowl on Sunday night as the Los Angeles Rams finished off the upstart Cincinnati Bengals, 23-20. It was the Rams’ first Super Bowl title as a California team and a fitting capstone to the N.F.L.’s long journey back to Los Angeles.

The game, and its veneer of fireworks, flyovers and high-fives — watched by more than 100 million fans — also affirmed an N.F.L. axiom yet again: The action on the field trumps the league’s endless parade of scandals, controversies and debates.

Days before Sunday’s game, N.F.L. Commissioner Roger Goodell, at his pregame news conference, fought off questions about discriminatory hiring practices and the allegations of sexual harassment against a team owner that led the league to begin yet another investigation into how the Washington football franchise is run.

Goodell pivoted away from the uncomfortable inquisition by leaning on a pillar of the league’s long-term growth strategy, expansion overseas: He announced that the N.F.L. planned to play four games in Germany in the coming years.

The league’s transformation into a multimedia juggernaut, one that is able to steamroll any controversy, was on full display in Super Bowl LVI, held adjacent to the nation’s entertainment capital, with nary a mention of the troubles that have roiled pro football of late.

The game was played at SoFi Stadium, a $5 billion digital palace built by one of the wealthiest men in sports, the team owner E. Stanley Kroenke, who moved the Rams franchise to Los Angeles six years ago with the blessing of the N.F.L. After being sued by the city and county of St. Louis for violating their own relocation guidelines, the Rams and the N.F.L. in November agreed to pay $790 million to settle the case. Not to worry: The value of his team has nearly quadrupled since it returned to California in 2016.

Kroenke’s stadium, which opened in September 2020 and is also home to the Los Angeles Chargers, is symbolic of where the league is headed. The last time the Super Bowl was played in Southern California, in 1993, at the Rose Bowl in Pasadena, the N.F.L. was already the nation’s biggest and most profitable league. But its revenues were still a part of an analog world in which selling tickets and beer were a major focus.

Since then, the N.F.L. has grown into a $16 billion behemoth that digitally distributes its primary product, football games, so they can be viewed on phones, game consoles and TV screens at any place and any time. Those same games have also become the fuel for video games, fantasy football leagues and, most recently, approved sports gambling, which all pour money into the league through its lucrative licensing deals.

Football-related content and games are now so ubiquitous that many football fans never attend a game. The 70,048 fans at Sunday’s championship game used digital tickets that came with a commemorative non-fungible token, or N.F.T.

As Phil de Picciotto, the president of Octagon, a worldwide sports and entertainment agency, said in an interview on Friday: “The N.F.L. is essentially the marketplace that everybody comes to and everybody meets at, whether it’s physically or digitally.”

Put another way, the N.F.L.’s games are now primarily intellectual property to slice, dice and resell.

This isn’t by accident. The tremendous cultural pull of football has made games the last communal, live destination programming for broadcasters, a huge draw for media platforms looking to build their streaming audiences. The majority of TV’s top 100 most-viewed programs each year are football games. In a fractured media landscape, the N.F.L. stands alone like Goliath.

In the weeks before the Super Bowl, the retirement of Tom Brady, the league’s biggest draw over a 22-season career, and news that a former coach, Brian Flores, was suing the N.F.L. for discrimination overshadowed discussions about how the two Super Bowl teams would match up. Those headlines, big as they were, had nothing on the most important event to the N.F.L.’s bottom line, a deal that went largely unnoticed among fans when it was announced last March.

The league negotiated new broadcast agreements with NBC, CBS, ESPN, Fox and Amazon worth about $110 billion over 11 years, nearly double the value of its previous contracts and roughly four times more than the N.B.A. currently receives.

The media money rolling in is so vast that every N.F.L. team turns a profit even before it turns on the lights.

Those outsize profits are a big reason that in the coming months the Denver Broncos are projected to sell for around $4 billion, nearly twice as much as what David Tepper paid in 2018 for the Carolina Panthers, the last N.F.L. team to change hands.

Aware of the league’s spotty record on diversity and that nearly every team owner is white, Goodell, at his news conference, mentioned he would “love to see a diverse owner” of the Broncos.

With unparalleled cultural reach and resources, the league absorbs criticism for how it treats the people who are at the heart of its heavily commodified product. With his lawsuit, Flores, who is a Black Hispanic coach, shined an uncomfortable light on the sideline of a league where nearly 60 percent of the players are Black yet only a handful of head coaches are of color. On Sunday, even President Biden said in an interview that the N.F.L. must hire more coaches of color as “a requirement I think of some just generic decency.”

Goodell is also trying to overhaul the league’s much-scrutinized record on the treatment of women, which was sparked anew by a former employee of the Washington Commanders telling a Congressional round table that the team owner Daniel Snyder had sexually harassed her.

The N.F.L. said Flores’s suit was “without merit,” and Snyder called the accusations “lies.” But Goodell announced two new investigations, one of Snyder and the other of the league’s hiring record.

The scandals will dent but not diminish the N.F.L.’s latest Hollywood moment, which was decades in the making. When the Rams and the Raiders abandoned Southern California after the 1994 season, the N.F.L. tried to entice another team to move to the country’s second-largest metropolitan area. For years, no one could find a way to build a new stadium.

While it waited to find the right combination of teams and venues, the N.F.L. created websites and mobile phone apps; started N.F.L. Sunday Ticket, a broadcast service that shows consumers every out-of-market game; and Game Pass, which does the same thing on a computer.

In 2003, the league started NFL Network, a 24-hour cable channel based in the Los Angeles area devoted to football.

“It’s just snowballed as media has continued to increase and proliferate with the number of screens and number of platforms,” said Hans Schroeder, the chief operating officer at N.F.L. Media.

Fred Gaudelli, the producer of “Sunday Night Football” at NBC Sports, sees little letup in this melding of football as entertainment: “It’s a machine that keeps getting fed, and it feeds its fans,” he said.