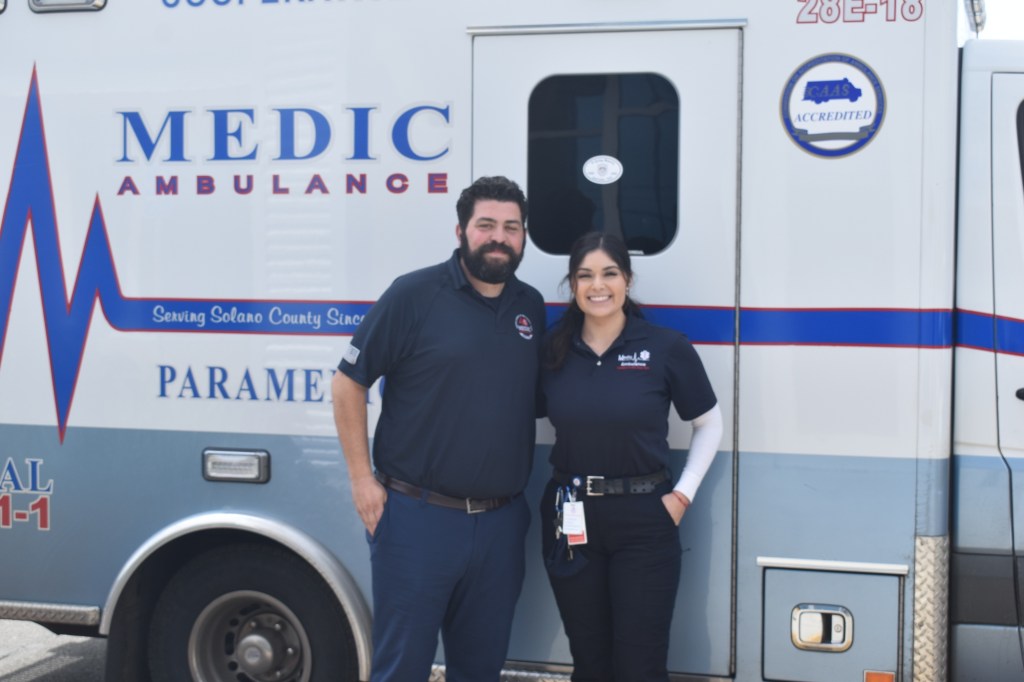 Staff with Vallejo-based Medic Ambulance are set to hobnob with Hollywood Thursday and it’s all in the interest of awareness.

That is, highlighting Emergency Medical Services folks, the important work they do and how you can get involved.

By the weekend, with the help of Telemundo and Universal Pictures, that mission will be accomplished.

Jimmy Pierson, president and CEO of Medic Ambulance, and Daniela Flores-Reyes, the company’s paramedic supervisor, will visit Los Angeles for the premiere of the film “Ambulance,” starring Eiza Gonzalez and Jake Gyllenhaal. They will also meet with Gonzalez and chat with Telemundo reporters.

The event, Pierson said, will hopefully spark an interest in the industry, which is in dire need of emergency medical technicians (EMTs), paramedics and other staff, and generate applicants.

And, the opportunity will highlight Flores-Reyes, whom Pierson described as “amazing.”

The issue with EMS, he said, is that COVID-19 sidelined a lot of folks and related issues (including pay) caused many to leave the industry, leaving a multitude of vacancies in a field where staff is so desperately needed.

Flores-Reyes was briefly affected, as well, due to her citizenship status.

A DREAMer, she was born in South America and was brought to the United States when she was 5. She didn’t fully understand her undocumented status until she was 17, when she graduated from Vallejo High School and wondered what her future could be.

Flores-Reyes had wanted to be a police officer, but told her undocumented status hindered that. So she took an EMS course at college instead, and never looked back.

“Honestly, I can’t see myself doing anything else,” the 27-year-old said.

After completing EMS school, she worked for an interfacility transport company before being hired at Medic Ambulance at 21. She was an EMT, then paramedic before being promoted to paramedic supervisor. She has received numerous awards, including being named a Public Safety Hero by Congressman Mike Thompson.

Flores-Reyes has responded to numerous large-scale wildfires throughout the region, including in Paradise, Butte and Lake counties, among others. She’s also participated in a youth program in which Medic Ambulance partners with Vallejo Fire and teaches at-risk 14-19-year-olds the ins and outs of the business.

Thus far, 12-13 of those kids have been hired by Medic Ambulance and a handful will become EMTs this year.

Part of the weekend’s events is sharing what EMS is all about, Pierson said, and the opportunities that are offered.

“Being an EMT opens so many doors,” Flores-Reyes said. “It’s the perfect entrance to medicine.”

Both staffers said they’re grateful that the American Ambulance Association tapped them for this event, which will allow them to also allay fears the Hispanic community may have about seeking medical attention due to their citizenship status.

“We help everyone,” Pierson emphasized.

Curiosity is the first step and research is the next. Contact people in the field, including at Medic, and get any questions answered. Then, move on to an education and licensing.