Prior to this miserable pandemic, there was nothing better than a good, old-fashioned cocktail party. You know the kind I’m talking about—where a crush of people cram into a too-small space that’s buzzing with the din of conversation, ice being scooped into glasses, and the distant beat of indiscernible music. The scene is never complete without passed hors d’oeuvres. For me, they play just as important of a role in cocktail parties as the cocktails themselves.

Ever since my awkward bar mitzvah years, hors d’oeuvres have been one of my favorite food groups. I was always the chubby kid who hung out by the kitchen door, waiting for the servers to emerge with their big silver trays of pigs in blankets, potato puffs that used to be called knishes, and spicy beef turnovers that went by kreplach. These jewels were the foundation of every traditional Jewish cocktail reception, and you can easily replicate the experience with a box of Cohen’s 40 hors d’oeuvres collection of frozen treats.

It wasn’t until I arrived in Palm Beach that I became acquainted with an entirely different classification of hors d’oeuvres. They were the polar opposite of knishes and kreplach but equally addictive, almost rigid in their precision and lack of attention to current culinary trends but completely fascinating—at least, to me. 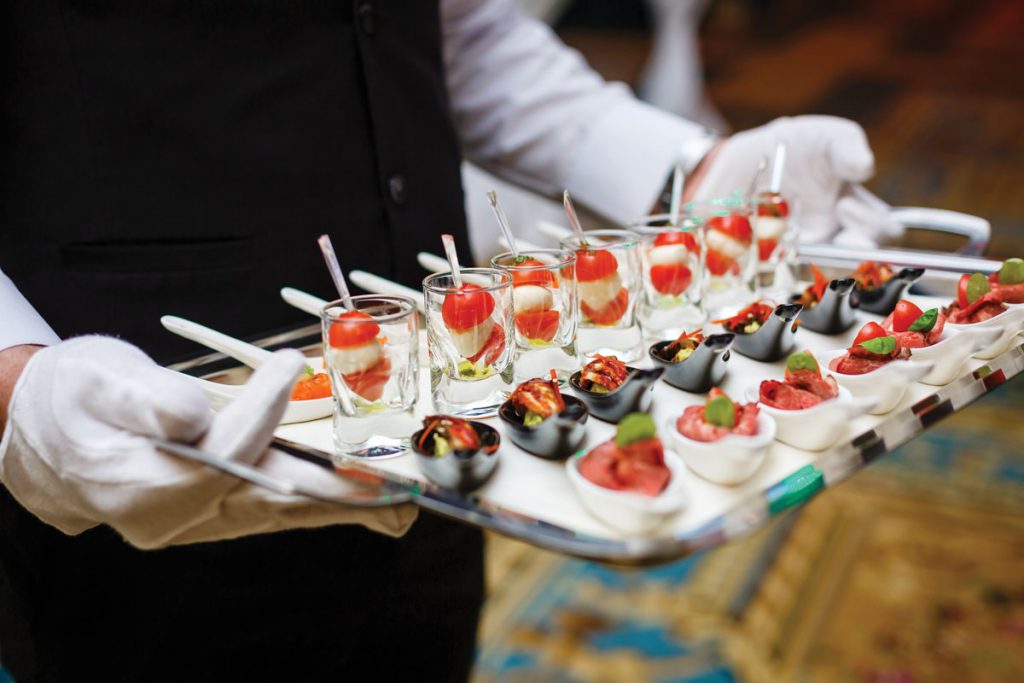 My first encounter was at the late fashion icon Lilly Pulitzer’s magical Palm Beach house. It involved a little piece of toasted white bread spread with smooth peanut butter and topped with crisp, crumbled bacon. It was an awakening. Who would have thought that three such humble ingredients could form something so delicious?

That was quickly followed by the curious Palm Beach Cheese Puff, a 1950s concoction that also involves a bite-sized round of toasted white bread, mayonnaise, grated Parmesan cheese, and a hint of onion, all baked together into a lethal, irresistible fat bomb. Indeed, petite pieces of white bread seem to be the common denominator at posh parties. Have you ever seen a tiny little hamburger, mysteriously glued to its foundation of toast, topped with a dot of ketchup? Trust me, I have. It might have even been in the presence of the late high-society doyenne Brooke Astor.

But the most enigmatic of social hors d’oeuvres that continues to make the rounds at fancy cocktail parties is… brown-sugared bacon. Pieces of glistening, sugar-glazed bacon, piled high like pickup sticks on a silver tray. Ask any cater-waiter: All they need to do is stand still with a tray of brown-sugared bacon and they will find themselves in the middle of a feeding frenzy.

At the long-gone New York City watering hole Mortimer’s, this treat was referred to as Millionaire’s Bacon. It currently accompanies a serving of deviled eggs at BrickTop’s on Palm Beach and its sister restaurant, the River House, in Palm Beach Gardens. Swifty’s in The Colony hotel refers to it as Billionaire’s Bacon. After all, what’s a hundred million or two?

When I decided to add this recipe to my repertoire, I studied the various methods as detailed in the scores of old-school charity and club cookbooks stashed away in my library, along with my original copy of the Mortimer’s cookbook. All were pretty much the same: Lay strips of bacon on a baking sheet, sprinkle with brown sugar, and bake until crisp. What the recipes didn’t mention was the smoke, grease, and very likely event of setting your house on fire, as well as the need for a hammer and chisel to release the bacon from the pan.

It’s no secret that I, like so many New Englanders, am a Dunkin’ guy. My husband, Rich, and I will frequently take a break from our virtual jobs for a jolt of iced coffee and an egg sandwich from the closest drive-through. But did you know that Dunkin’ also makes its own version of sugar-glazed bacon? Compared to what I know to be the real thing, I find it, well, flaccid. It’s certainly sweet and even has the sophisticated addition of cracked black pepper. Yet, I was disappointed with what I discovered in that little wax paper bag. But then it dawned on me: Perhaps, it could be rescued.

Behold, my secret shame: Perfect candied bacon, for which one guest at a party thrown while we were still throwing parties exclaimed, “Wow! Yours is so much better than the club’s!” If she only knew.

Preheat oven to 350 degrees, with two racks arranged in the center. Line both pans with parchment paper. Lay out bacon in neat rows. Bake for 8 minutes exactly. Let cool completely before removing from pan with a spatula and storing in an airtight plastic container. If serving same day, which I recommend, simply leave out on your kitchen counter. To serve, arrange artistically on a silver tray, preferably lined with a linen napkin, or piled high on a footed glass cake stand for a more modern presentation.