Cole Sprouse on Finding a Healthy Balance in Hollywood… 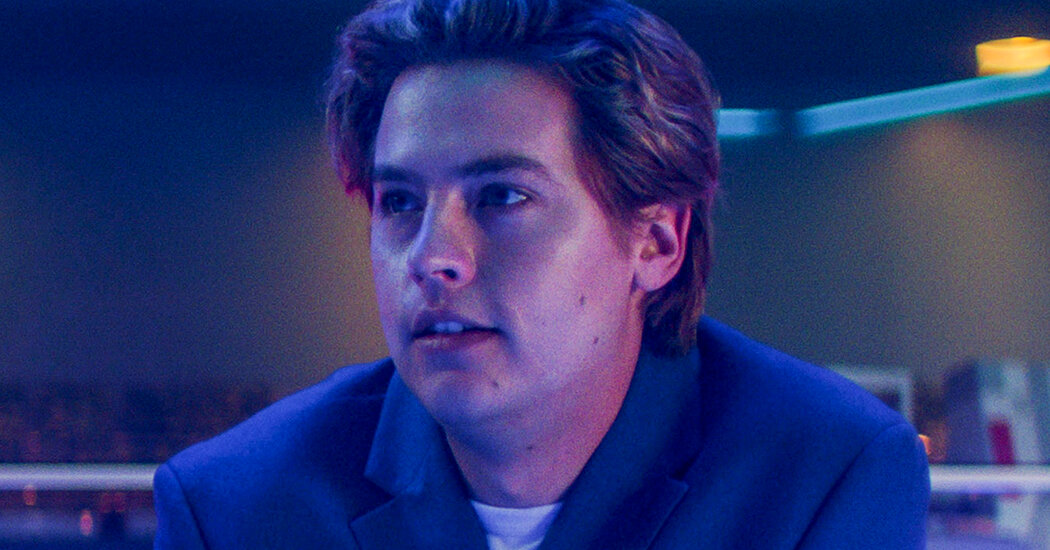 “I hope you don’t mind, I’m going to be scarfing down this chicken wrap at the same time we talk,” Cole Sprouse politely informs me as he sits in the kitchen wearing a fuzzy, baby blue sweater. The wrap in question is already halfway to his mouth.

Sprouse is used to multitasking.

He and his twin brother, Dylan, began their professional acting careers when they were infants and worked steadily throughout their childhoods, sharing prominent roles on “Grace Under Fire” and in the Adam Sandler film “Big Daddy.” Cole went on to play Ross’s son on “Friends” before reteaming with Dylan in the Disney Channel sitcom “The Suite Life of Zack and Cody” (Cole played the brainy Cody). The tween hit led to a spinoff series, TV movie — and mega kid stardom for the twins. By age 18, they’d effectively burned out.

But after graduating from New York University with a degree in archaeology, Cole Sprouse fulfilled a promise he’d made to his manager to give one more round of TV auditions a go before quitting the industry for good. He booked the role of the brooding outcast Jughead Jones on the CW drama “Riverdale” and was sucked in again.

“I started acting when I was so young that I hadn’t actually attempted, as an adult, to think about if I really enjoyed performance,” Sprouse said in a recent video call from Vancouver, British Columbia, where he’s currently filming the seventh season of “Riverdale.” He continued, “When I returned, I reminded myself that I do very much love the art of acting. But I still have a very complicated relationship to celebrity culture.”

He’s learned to guard his private life. Rare public comments about his relationships past (namely, with his “Riverdale” co-star Lili Reinhart) and present (the model Ari Fournier) are scrutinized by fans and widely recounted by entertainment outlets. He started a secondary Instagram account devoted solely to sharing the photos he takes of strangers while they’re trying to sneakily snap photos of him. “It was an attempt to go, ‘Hey, I actually have agency in the situation, too,’” he explained. “It helped me a lot.”

His latest role is the lead in the HBO Max rom-com “Moonshot” — not to be confused with the unrelated 2022 releases “Moon Knight” and “Moonfall.” In the near future, where robots run coffee shops and Mars is being colonized, Sprouse plays Walt, a hapless college student who hitches a ride on a Mars-bound rocket alongside Sophie (Lana Condor) in an attempt to reach another girl on Mars he thinks could be the One.

Intermittently puffing on a vape pen after finishing the chicken wrap, Sprouse spoke about billionaires, the effects of childhood fame and turning 30.

These are edited excerpts from our conversation.

“Moonshot” is a futuristic take on a conventional romantic comedy. Are you a rom–com fan?

I have my favorites, and they’re all over the map. I’m a huge “Forgetting Sarah Marshall” fan, for example. And though there’s a heavy romantic element throughout it, most people would just call that a comedy — and yet, by all genre boundaries, it is a rom-com.

I think for so long romantic comedies were put down as “chick flicks,” something lowbrow that only a female audience would care about. Male-centric entries like “Forgetting Sarah Marshall” made some people rethink that notion.

The general trend with the arts always starts with a large female fan base really falling in love with something. In a lot of cases, we see the female audience braving the territory first, and then everyone follows. Ultimately, with “Moonshot,” we set out to make a movie that didn’t really take itself super seriously, that we had a lot of lighthearted fun on, and we were able to weave an old married couple dynamic into Lana and I’s relationship.

The film also throws some solid punches at the billionaire space race: Zach Braff’s Elon Musk-esque character admits he could have used his fortune to solve world hunger dozens of times over, but went to Mars instead. How do you feel about the current space cowboy endeavors of people like Musk and Jeff Bezos?

Oh, I think it’s tremendously masturbatory. It’s a ridiculous thing. When I was studying archaeology, we used to have this conversation about the resurrection of the mammoth. The conversation would always devolve into two camps: the camp that really wanted to see the mammoth walk the earth again. And the camp that was going, “Hey, we have active species that are currently going extinct. If we put the resources you are talking about putting into the already extinct mammoth and shift that focus to the present, we could do way more good.” I feel like this conversation about space cowboys is very similar. I’m in the camp where I go, let’s focus on the present. We have an active space that we are living in that is currently decaying. We need to shift focus and resources to here.

So, no chance you’re booking a commercial ticket on a rocket any time soon.

No, I’m already such a paranoid freak when it comes to flying. I couldn’t imagine what my control-freak nature would do when we started taking off. I would be a nervous wreck.

People like to talk about former child stars in this dichotomy of either they spiral out of control or, somehow, “come out OK.” Do you think it’s possible for anyone to actually come through that experience unscathed?

My brother and I used to get quite a bit of, “Oh, you made it out! Oh, you’re unscathed!” No. The young women on the channel we were on [Disney Channel] were so heavily sexualized from such an earlier age than my brother and I that there’s absolutely no way that we could compare our experiences. And every single person going through that trauma has a unique experience. When we talk about child stars going nuts, what we’re not actually talking about is how fame is a trauma. So I’m violently defensive against people who mock some of the young women who were on the channel when I was younger because I don’t feel like it adequately comprehends the humanity of that experience and what it takes to recover. And, to be quite honest, as I have now gone through a second big round of this fame game as an adult, I’ve noticed the same psychological effects that fame yields upon a group of young adults as I did when I was a child. I just think people have an easier time hiding it when they’re older.

After it was announced that “Riverdale” had been renewed for a seventh season, a lot of memes popped up imagining your reaction when you heard the news. The general internet consensus seemed to be that you were completely distraught to have to do another season. Is that accurate?

[Laughs] It’s not completely accurate. One, because I’ve just assumed we’re going to see the finality of our [seven-season] contracts. Two, I think the internet assumes — because of how insane our show is — that we’re probably doing a bit worse than we actually are. It’s easy to forget that people love the show. And I do think it’s going to be much more appreciated in 10 years than it is right now. It would be pretty pompous of me to say that another season of financial stability is not something that would be appealing. Though I’m not going to lie. The memes do make me laugh.

You’ve built a side career as a professional photographer, mainly in fashion. What is it about that medium that made you want to pursue it?

When I was in school, I was traveling a lot for archaeology, so I always had my camera and I was taking almost anthropological-type photos of the people I was meeting, the culture I was surrounded by. And then, just by being in New York City, I got wrapped up in fashion work and built a portfolio. That was my main source of revenue until “Riverdale” Season 2.

You’re turning 30 in August. Does this decade feel like the start of a new chapter?

Definitely. ​​I feel like my ducks are in a row better than they’ve ever been. We’re also seeing the conclusion of a program I’ve spent the majority of my 20s on, so there is this world of possibilities that lies before me at the end of this production that I find incredibly appealing and intoxicating. And, I hate to break it to everybody, but I’m not the only 30 year old playing a teen on television.

You made it to college in “Moonshot.” You’re starting to age up.

Just stringing them along, slowly but surely. In an ideal world, when “Riverdale” finishes, I would love to be doing one to two movies a year and photography the rest of the time. And the logical intersection of those two worlds will eventually be directing.

We’re living in a time of extreme nostalgia for the ’90s and 2000s. Is there any chance you’d go full circle and do a “Suite Life” reboot?

I don’t think I’ll ever return to that. Not that I have a problem with other people doing the reboots thing. I’m just a big believer that if something is beautiful in the past, you should let it stay beautiful. To bring it into the future feels a bit like reheating a really good, fresh meal in the microwave. It would be hard to be in my 30s and go [in a deep growl], “Zack and Cody are back, man!”